Start a Wiki
I'm Fantine. Yes, my parents named me after Fantine in Les Mis. Please do not judge them. They wanted a daughter with an 'elegant' name.

I don't really 'style' my hair. For me, it's messy bun, curly, or just brushed. I like it best as a messy bun.  I would dye it brown, or like, a reddish color, but I think it's already pretty as is.

I don't really wear makeup, only for special occasions, so, yeah, I like it all natural. But, when I do wear makeup, I like wearing lots of eyeliner, and my lashes are kinda invisible, so I like wearing fake lashes instead of mascara. I like doing character makeup on Halloween. But, um, yeah, that's pretty much it.

My mother. I was never really that close with her, but she's really nice and she wants me to have a good career. She teaches 8th grade history back in Washington. She had me when she was 20, so she wasn't married to my dad when she had me, so I was flower girl at their wedding. (They got married when I was 5.)

My father. He was really close with me and he really loves me a lot. <3 He's really supportive, and he used to help me write my short stories when I was young. You have no idea how much I miss him. He was kind, gentle, and everything a father should be. When I was younger, he used to call me Fanny. (Still not cool, dad.) But, no matter how many times he calls me fanny, or how many horrible jokes he says, he is an A-list dad.

My little aussie shepard. <3 I miss him a lot. 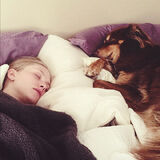 as I wanted to. I still see him when on holidays when I get to go home.

I was born on May 5th in 1994 in Pasco, Washington to two loving parents named Angel and Brice. They named me Fantine Cosette, after the mother and daughter in Les Mis.

I was never really the artsy type growing up. I loved to write, though. I would always write little stories when I was in Elementary School. When I was in Middle School, I would make little chapter books. In my first two years of High School, I kinda stopped writing because of all my homework, and I would stay up until 12 doing work. I got good grades though, so I really didn't care. In my junior and senior year, I got back to writing, and got into Harrington.

When I was growing up, I don't know what made me the target for people's bullying, but like many people, I got bullied. It started in 3rd grade. I never really talked to anyone, so they called me a loner, loser, they told me to stop writing, and it was horrible. I don't see why anyone would pick on someone, JUST because they enjoy to write. I cried a lot, I tried  to tell my parents, but I don't know what they would think, as much as I love them. It kept going on until 7th grade. In 7th grade, I met this girl, her name was Lillian. Like me, she loved to write, so we became best friends really quick, and I just forgot about all the bullies. Not quickly, but very slowly.

In 8rd grade, and I eventually started a writer's club. 2 people from 6rd grade, Lillian, and I were apart of the club. Once again, I was an outcast. But in that writer's club, we still made lots of progress. We made a poem book, and a short story book. Very little people actually bought it, but it didn't matter. I heard that the writer's club is still going on in my old middle school. I also wonder how Heather and Stacy (the 6rd graders) are doing right now. They'd be juniors. But because of that writer's club, I loved going to school, because even if it did have a tiny amount of people, we still made it work.

When I got into High School, Lillian and I got into drama. We did musicals every year. We did Damn Yankees in my freshman year, West Side Story in my sophomore year, Les Mis in my junior year, and Hairspray in my senior year. Les Mis is how I found out my name. Not many people are named Fantine. But, out of all the musicals we did, I think I enjoyed West Side Story the most. Our Maria was so great.

After High School, I moved to... well, here, and started going to Harrington College. I think I was the only person in my High School to go, because I haven't met anyone I've known before. I did meet one person, and she's nice. I still miss Lillian though.

Um, I act awkward a lot. I like talking to people, and I usually care about people even if I don't know them very well. I'm social, but I don't have 1 billion friends. I also joke a lot. Most of the time my jokes aren't funny, but I try. ^.^

She's really nice. I consider her a friend.

sorry the first 40 pictures are of me and my dog

1 of 99
Add photo
Retrieved from "https://californiadreaming.fandom.com/wiki/Fantine_Lef%C3%A8vre?oldid=51286"
Community content is available under CC-BY-SA unless otherwise noted.