Chloe Conrad
is away. You cannot roleplay with this character unless the roleplayer comes back within this month.

I'm kind of.. girly. I like anything pink, with ruffles and dresses and the skirts and everything. I guess it makes me feel good about my self or something? I've never been a big fan of makeup because I get really sweaty easily, and its not just going to work okay. I also like changing my hair color, it all started when I was 13. Since no one really noticed me and I craved attention, so I dyed it different colors. But I think I'll just stick to black now.

My mom is nice most of the time. She likes to act like a teenager and say "yo" at the end of her sentences, which is really weird. I used to really like her before but she's trying waaay to hard nowadays.

Dad was never fond of me, he might think I don't notice it but I do. He always prefers Spencer over me, and I hear him and mom talk about me behind my back. If you didn't like me, then why did you adopt me in the first place?

My brother. Me and Spencer have never been on good terms since I began living with them. He disliked me and so did I, but eventually, I guess you can say that we've gotten past that phase and now we're friends, kind of.

My biological older sister is Merizalde. She's nice and all but I can't take her seriously.

I only know like half of my history, but okay. I was born in California, by my parents who are apparently half-Korean 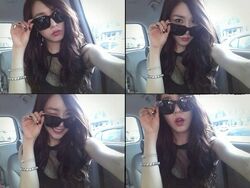 and half-American. I guess they didn't want me, and sent me to an orphanage. No one really adopted me, I never really minded because everyone in the orphanage was nice. But a few months after I turned six, a family came and adopted me. So y'know the Conrad's adopted me, though Spencer wasn't particularly fond of me when I first came. I also had a pretty rough childhood, people assumed I was the stereotypical Asian smartypants at school. So they would ask me to do their homeworks and I refused, then they would call me names and I don't remember much because halfway in 6th grade, I somehow changed and got noticed. And that's about it.

I'm kinda spunky, and I get mad really easily. I'm also really emotional. I'm also an overachiever. But most of the time, I'm really... masungit and a maldita. I never mean to be any of those but it just comes naturally and its too late to take back because I've already done it. Sorry in advance if I act like a snob when you're talking to me.

My bestest friend everrrrr. Literally the best person you'll ever meet, but sadly she left because her mom is expanding her business and something along those lines. I'll miss her though. </3

1 of 414
Add photo
Retrieved from "https://californiadreaming.fandom.com/wiki/Chloe_Conrad?oldid=50217"
Community content is available under CC-BY-SA unless otherwise noted.